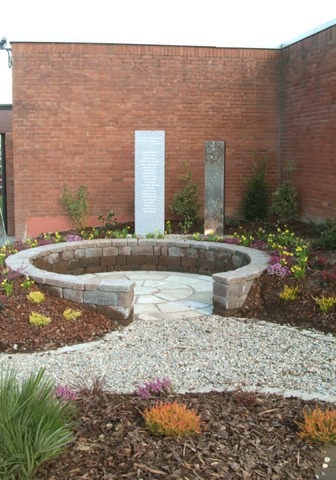 An Gáirdín Cuimhneacháin
We wanted to commemorate our deceased students with a fitting tribute and thus the idea of a memorial garden was born.

With the help of a garden designer, the able hands and strategic thinking of Pat Neilon and Tommy Glynn, and some ideas of our own, it began to take shape. John Walsh and Brenda Kelly got fully behind the project and Derek Hume (a past pupil now working at Cement Roadstone), went out of his way to supply us with materials.

And so the “Memorial Garden” project began in earnest. John Kelly, a parent from Saggart arrived with his digger and spent a long day excavating the site with the help of his son Paul. Paul Allen from the Parks Dept. (South Dublin County Council) gave us advice on tree planting and John Gannon shared his expertise on exterior lighting.

As I write this, the garden is almost finished. It will be fully completed in time for our 25th Anniversary Celebrations on March 3rd ’06 when Bishop Eamonn Walsh will declare it officially open.

Our memorial garden will be a tranquil place for parents, students and teachers to visit. It’s a small circular area enclosed by a dry stone wall, surrounded by plants and shrubs, with the sound of water and the students’ names engraved on a granite stone.

“And I shall have some peace there, for peace comes dropping slow…”
W.B. Yeats.

Click on any image below to launch the photo gallery